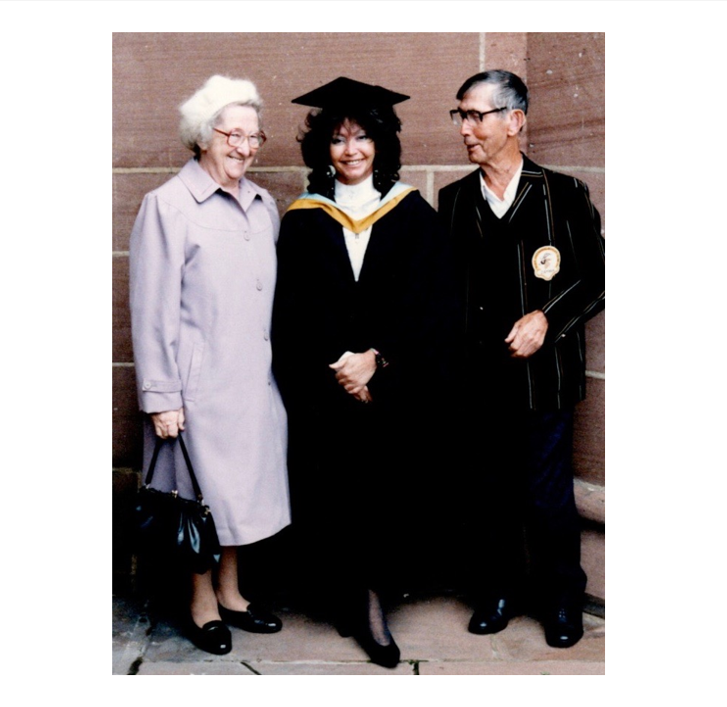 We shared Willo's first blog, ‘To begin at the beginning’ back In May 2020, and over the last 18 months, Willo has talked about everything she has been through. From moving back to England for treatment, her Abdominoperineal Resection, going back to art school post-surgery and the amazing friends and family that helped her through.

When Willo first started her series with us she wrote:

“As I am a survivor (thus far) of two primary tumours, one recurring – and later with metastases (30 years ago at the time of writing), I hope my story might offer some support and encouragement to those currently in a similar daunting situation.”

Shared experience is at the heart of our Community, and as one member wrote after reading Willo’s blog:

‘35 years and still going strong. There is hope for us all.’

Today we are back with Willo as she starts Chemotherapy after she received the difficult news that her original tumour had spread, and that she also has cancer of the cervix.

Less than three weeks after my discharge from Queens Park Hospital, I started chemotherapy at Christies. I had two different drugs, 5FU and Mitomycin on the first occasion and five more treatments at three-weekly intervals.

I had a light lunch of cauliflower cheese (anticipating nausea, I thought the less I ate the fewer times I would be sick). Paul (my partner) was with me when the sickness started, suddenly and violently; so violently that I wet myself every time I retched. (It was more than 20 years before I could face cauliflower cheese again!). Next day Paul returned to collect me and drove me back to his place with a sick-bowl on my lap and several spares in the car!

“Next day Paul returned to collect me and drove me back to his place, with a sick-bowl on my lap and several spares in the car!”

The next treatment three weeks later was much worse. After the radiotherapy I had gone into instant menopause and I thought this might be a contributory factor as to why I was feeling so unwell mentally. I felt my flesh was sucking in and yet my body felt like it was exploding outwards. I felt like a hostage and wanted to tear the cannula from my arm and make a run for it. 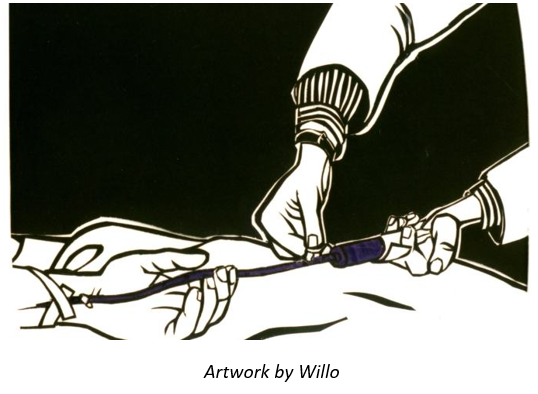 “I felt like a hostage and wanted to tear the cannula from my arm and make a run for it.”

More and more pressure had been heaped on the nurses and they no longer had any time to sit and reassure me as they had done previously. Instead of all the familiar faces, there seemed to be more and more bank or agency staff. As a result, there was no continuity of care.

The chemicals gave me a runny tummy, which really burned my stoma and caused me a lot of pain, so I felt the need to irrigate each day. Trying to irrigate in a hospital toilet whilst hooked up to a drip that was feeding chemicals into my hand or arm was a bit of a nightmare to say the least.

Apart from vomiting my insides up during the infusion, a few days later I would start with ulcers in my mouth and then through my entire digestive tract (mucositis). I could hardly eat anything as it hurt too much and I was in a mess. After that second infusion I told Paul I couldn’t go back for anymore, I was finished. He would hear none of such nonsense and plied me with Build Up drinks and stuffed me with bean sprouts and brown rice. Unlike other foods it didn’t exacerbate the soreness in my mouth and gut. Much later I was to discover that a hearty meal of brown rice before the chemo was better than eating very little. It seemed to line my tummy and lessen the effect of the toxins).

“After that second infusion I told Paul I couldn’t go back for anymore, I was finished. He would hear none of such nonsense and plied me with Build Up drinks” 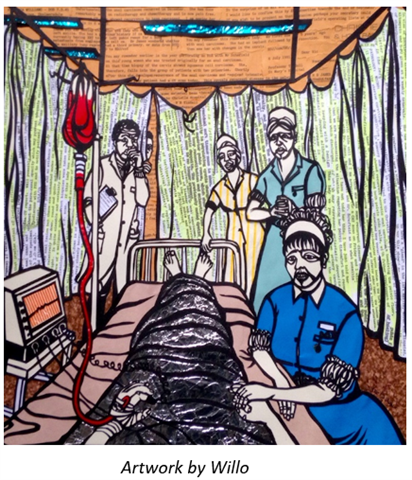 During the chemo I also had problems with my vision, memory and concentration – and mentioned these issues to the doctors who said they hadn’t heard of those side effects. As I usually arrived at the hospital very early and started my infusion very late, I decided to make use of the time (when I was still feeling human) by conducting my own unscientific survey with the women on the ward.

I was interested to find that the majority said they experienced the same difficulties as me. I reported my findings to the doctors and thought no more about it, but now, some 30 years later, I find all three listed as possible side effects of chemo – and even given the title “chemo-brain”!

Even though Dr J had initially been very reassuring about the possible hair loss, the inevitable started to happen. In retrospect I should have cut my hair short while it was still thick and silky, but I was clinging to the hope I might not lose it. Gradually I noticed a change in the texture – it became dry and brittle and I had a terribly itchy scalp, but still I clung on, refusing to accept what the consequences might be, but then it happened. 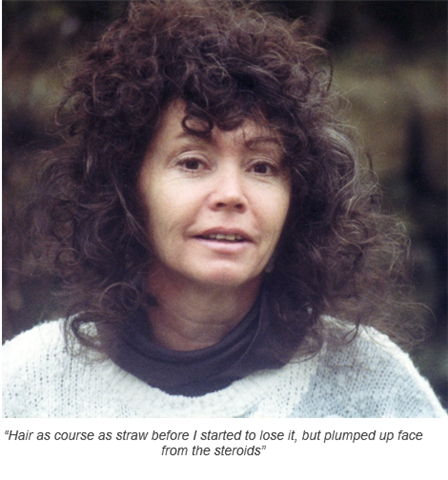 “now, some 30 years later, I find all three listed as possible side effects of chemo – and even given the title “chemo-brain”!”

I first noticed it whilst I was combing my hair, and then great clumps would appear on my pillow each morning till eventually it all fell out. The loss of my eyebrows I could cope with as they could be pencilled in, but the loss of eyelashes was quite a different matter.

My lovely long thick black lashes – gone forever. Even though they grew again they have remained very sparse, perhaps also due to the aging process and not least that instant menopause. My nails suffered too. They have always been corrugated from root to tip, but during the chemo they grew corrugated from side to side – very weird!

One thing I hadn’t considered about being bald was how cold I would feel! Fortunately, I love wearing hats and my mum made me a selection of knitted berets that were warm and snug. The wigs I was issued with were a real treat and my Art History tutor gave me a lovely large scarf to tie in a turban. The steroid injection caused me to plump up and with a nice head of hair, albeit artificial, I started to look remarkably well!

“When my hair finally fell out, I plaited half of it, sealed it at the top and added tape so that he could attach it to his own, thus giving him a plait to be proud of” 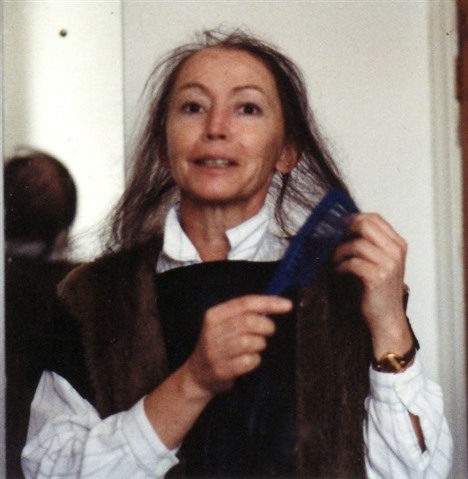 A beneficiary of my hair loss was Wilf, a porter who had regularly wheeled me to and from the radiotherapy department. He wore a rather thin bedraggled pigtail and one of his fellow porters, a young strapping lad, had a nice thick plait almost down to his waist. This dismayed Wilf, so when my hair finally fell out I plaited half of it, sealed it at the top and added tape so that he could attach it to his own, thus giving him a plait to be proud of!

“Around this time, I had to submit my dissertation to the college and hang my degree show.”

Around this time, I had to submit my dissertation to the college and hang my degree show.

A month after my chemo finished I had another CT scan and a check-up with Dr J, where he asked me to bring Paul into his office, which I knew to be the procedure when a doctor may think a patient might need some support when being given bad news. He looked me straight in the eye and said the scan results were good, but there were no guarantees; “however, I know you – and what you are capable of.

“He looked me straight in the eye and said the scan results were good, but there were no guarantees”

We have done everything we can, so it’s up to you now!” I knew what was implied, but he stopped short of telling me to go home and put my affairs in order, he was throwing down the gauntlet – and I accepted the challenge.

A month after my treatment finished, I attended my graduation ceremony at Liverpool Polytechnic, wearing my favourite wig! 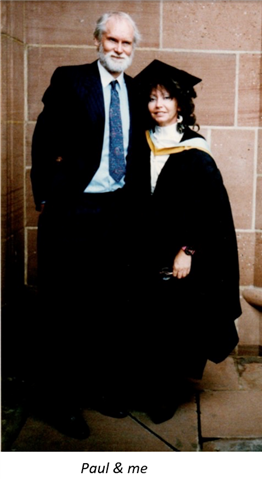 “A month after my treatment finished, I attended my graduation ceremony at Liverpool Polytechnic, wearing my favourite wig!”

We want to thank Willo for sharing everything she has been through, as well as her incredible artwork and photography, with us over the last 18 months. As the longest running Community News Blog series comes to an end, we asked Willo what her hopes were for all those who read her blog.

When I moved town, I had to change my GP and discovered that my notes were incomplete, with no mention of the metastases. I could tell the doctor thought I was a fantasist, so that’s why I contacted the hospitals I attended to obtain copies of my medical records. These were my proof – and also proof that against all odds, we could survive. It was only then that I started to document my story, hoping that others might find it beneficial.

At that time I wished I had kept a journal of everything I was going through, as it would have made my writing much easier. But then I realised that having other, more important things to concentrate on, was actually beneficial.

I had two fine sons, recently met the love of my life and had two elderly parents to care for. Plus, I was in the final year of my degree and determined to graduate. I put all my spare energy into that – I didn’t have time to die.

This week I met with a young woman living locally who has the same primary as me. She discovered my Community News blog series around the same time as her diagnosis and found it helpful - I hope you will too. Best wishes to you all.”

Shared experience is so important here on the Community and, if reading Willo’s story has impacted you today, why not comment below to let her know.

You can read Willo’s full story from volume one of her blog by following the links below: