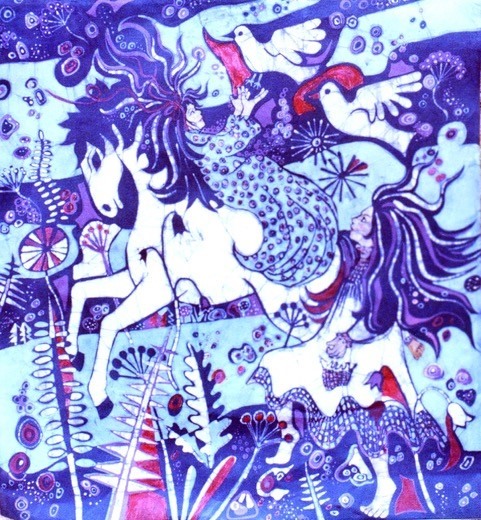 It was early February – still hot when I flew from Lusaka to winter in Germany, where I had to catch a connecting flight. When we reached Frankfurt the pilot announced it was minus nine degrees, but with the wind-chill factor it was -16°. The passengers gasped when the doors opened and the cold air rushed in – and walking out of the aircraft onto the top of the steps we could hardly breath so made our way with great haste to the buses that would transport us to the terminal building.

'When we left Frankfurt the weather outside was bright and crystal clear, the white tipped mountains swathed in soft cotton-wool clouds'

When we left Frankfurt the weather outside was bright and crystal clear, the white tipped mountains swathed in soft cotton-wool clouds. Earlier, when we had flown over the Alps on our way to Germany it was still dark, so I missed the view then. As the cloud cleared and the mountains gave way to the lowlands the ground remained white, just divided into irregular sections by hedges, trees and roads.

We flew over Ostend and across the Channel and it was dazzling in the sunlight. Even above Folkestone and Dover we could see the snow extending from the sea and covering the whole of southern England. Above Nottingham I thought of my elder son down below, probably still tucked up in his bed at his student accommodation, blissfully unaware of what was happening to me.

Manchester was relatively green and quite mild at 1°C, but this time the giant vacuum hose was waiting to suck us from the aircraft and save us from the elements. I made my way with the few passengers (mainly businessmen carrying only brief cases or hand luggage) to the arrivals hall and it wasn't long before I realised my luggage was still in Frankfurt! I was assured my case would arrive on the evening flight and would be dispatched by carrier to my parents address the following day. I’d always advocated carrying a change of clothing in one’s hand baggage, but of course on this occasion I had forgotten!

'It wasn't long before I realised my luggage was still in Frankfurt!'

I was met by my very good (ex-Zambian) friend, Dorothea (a nurse) and her youngest son who were looking everywhere for me, as all the other passengers from Frankfurt had left long before I appeared.

We drove to their house in Manchester for a cuppa and then to my hometown to meet my ex-sister-in-law who worked in admin at our local hospital. Apparently my ex had already been in touch with her and she had contacted my GP, so already the wheels were in motion – and she had made an appointment for me to see him later that day. Dorothea left us then and returned to Manchester as I went off to see the GP. I gave him the letter George had written for him and without examining me he said he would refer me to a consultant.

By the time I got back from the health centre my ex had arrived at his sister’s and he came with me to break the news to my folks. He also agreed to contact our son at university and bring home our younger son from school on the Friday, as he only boarded four nights a week, spending the weekend with my parents. The journey home would also give them time to discuss my situation, so that I wouldn’t have that difficult task, though needless to say, our meeting was still very emotional.

'...needless to say our meeting was still very emotional'

Eventually I received the appointment with the consultant, who in turn organised another biopsy – and barium enema x-Ray, the very name filling me full of dread, but nothing had prepared me for what preceded it. I was given two sachets of the laxative Picolax to take, one sachet 24 hours before the x-ray and then another 12 hours before and also a diet sheet for that period. The idea being to flush out the entire system and as soon as the first sachet started to work I was frightened to leave the toilet. Not only that, I was vomiting to an extent were I though my whole stomach felt like it was coming up into my throat. I couldn’t even keep water down, so became terribly dehydrated which caused a screaming headache.

Then came the second sachet, which I took as per instructions. Big mistake, as by that time I had no strength left and was either sitting on the loo or retching uncontrollably – or both. I could barely stand and had no idea how I was going to get to the hospital. I wouldn’t even have made it to the bus stop and no way a taxi driver would have taken me with a bowl sitting on my lap! My mother hatched a plan and went and asked her neighbour, even older than she and in his late 70s, if he would take me. Together they practically carried me to his car and bundled me inside.

'My mother hatched a plan and went and asked her neighbour, even older that she and in his late 70's, if he would take me'

I didn’t want Mum to come, so off I went with Mr P. When we reached the hospital I said he had no need to wait as I had no idea how long I would be, but promised to call him if I needed him when it was all over and done with.

Only those who have had a barium enema x-ray can fully understand the discomfort and indignity, so combine that with already feeling like death and you might visualise the scenario. The literature I read beforehand hardly described my personal experience, but I do concede it might have been because I was so unwell due to the effects of the Picolax. I think it affected me so badly as the dosage was the same whatever size you are and I’m only 5 foot and weighed around 100lbs at the time.

Good old Mr P was still waiting for me when I came out and he took me safely home!

I celebrated my 41st birthday and was smothered in flowers from my friends and some of those in Zambia had clubbed together to buy me a fabulous short-wave radio, which was to keep me in touch with the outside world when I returned to Zambia. 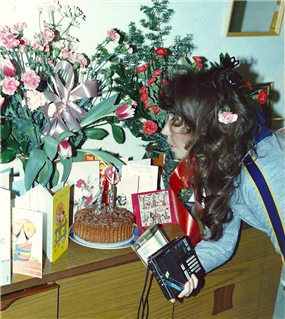 My 41st birthday, with cake, flowers and short-wave radio 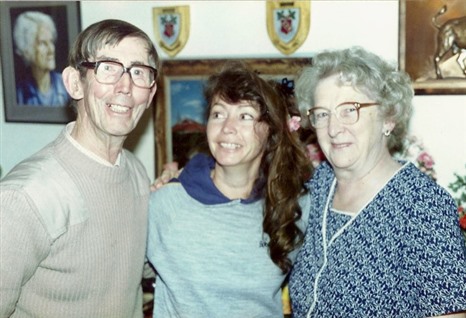 With Mum and Dad on my birthday

Back at the local hospital a couple of weeks later, the results of the biopsy and x-ray were given to me by a visiting consultant from Christie Hospital in Manchester, the nearest hospital specialising in cancer at that time. His news seemed more optimistic than the results I initially had in Zambia. He said it was a squamous cell carcinoma, which was a type of skin cancer and he felt it could be treated with radiation.

'His news seemed more optimistic than the results I initially had in Zambia. He said it was a squamous cell carcinoma...'

When my son came home from school that Friday, I was able to give him the good news. Associating skin cancer with the sun, he immediately quipped, "well you know Mum, I always thought the sun shone out of your arse!"

We want to thank Willo for kindly sharing her writing and beautiful artwork with us. You can find the next volume of this series here in our Community news blog.