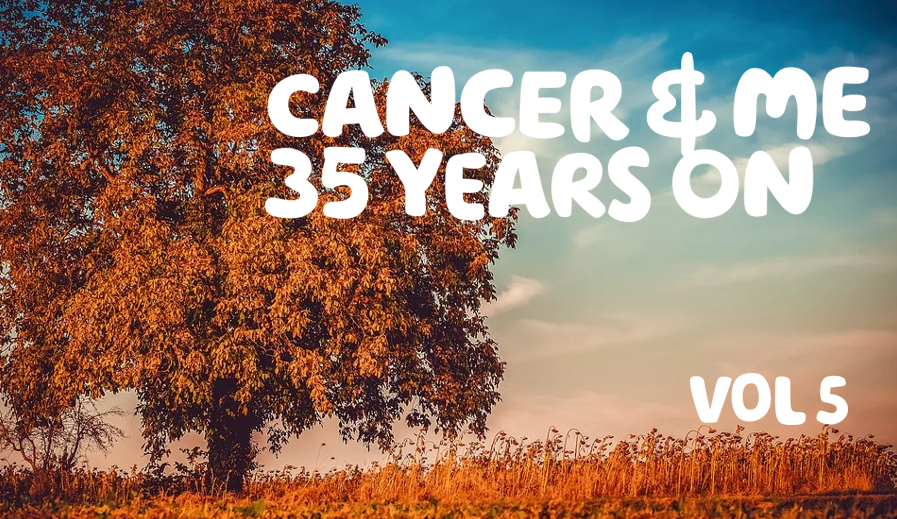 'For almost a week the caesium needles were sewn into position and I was becoming quite badly burnt and the sickly sweet smell of burning flesh was very noticeable. As the deadline for removal approached I became more and more sore and very scared, as I have good healing skin and anticipated it being difficult and painful. As the timing had to be accurate the removal would begin precisely at 10.30 at night - and a sister had to perform the procedure as staff nurses weren’t qualified to do so.

That night we didn’t have a sister on duty, so someone from another ward had to be called, a stranger, instead of a sister I knew and trusted implicitly. As the new sister entered the ward I was in a state of panic, but without justification, as she was just as kind and caring as all the other nurses who had been looking after me. Upon hearing my concerns she called a doctor, who came and administered an intravenous dose of Valium, which quickly sent me off to cloud cuckoo land! The sister was onto the 7th needle before I came back to earth. From then on it was fairly painful, but far from horrendous.

'From not being able to eat any roughage, I was suddenly stuffing myself with fruit, vegetables and anything else recommended'

The next hurdle was to get the old bowels open and I couldn’t leave hospital until then. From not being able to eat any roughage, I was suddenly stuffing myself with fruit, vegetables and anything else recommended - but to no avail! Everyone on the ward was most concerned about me. I would go off to the loo and when I eventually emerged they would ask if I had been successful. Negative! Finally, in desperation I was given a castor oil enema. I had to lie in bed with the foot tilted upwards in order to help the caster oil do its work. When finally we had lift off it was excruciating – the back passage being so terribly burnt, but I felt it worthwhile as a dreaded colostomy had been avoided!

'she clapped her hands and exclaimed in her very refined voice, “Oh, jolly hockey sticks!”'

There was a rather sophisticated elderly lady in the bed next to me and when I told her the enema had worked she clapped her hands and exclaimed in her very refined voice, “Oh, jolly hockey sticks!” I thought that expression only existed in girls’ stories from a bygone time!

I’d been in hospital two weeks and back home at my parents I had daily visits from the District Nurse to check on the burns, which by then were oozing pus and covered approximately four inches in diameter. There wasn’t much she could do, finally deciding on honey dressings. Sitting and going to the toilet remained problematic, but on the 21st April Prince Charles and Diana were coming to open a sports centre in my town and I wanted to see them, as did Mum and Dorothea, so despite the pain and discomfort off we went.

Mum and me waiting to see Charles and Diana (bit of a pained expression on my face!)

Being faced with your own mortality really spurs you on and even though I could hardly sit down even with the aid of a rubber ring (provided by Dorothea), I worked like a wild woman on commissions to try and make enough money to repay my airfare. I didn’t have time to die!

'Being faced with your own mortality really spurs you on'

Looking back it’s hard to remember which paintings I did before going into hospital and after being discharged, but I think these are some from that period - before returning to Zambia. 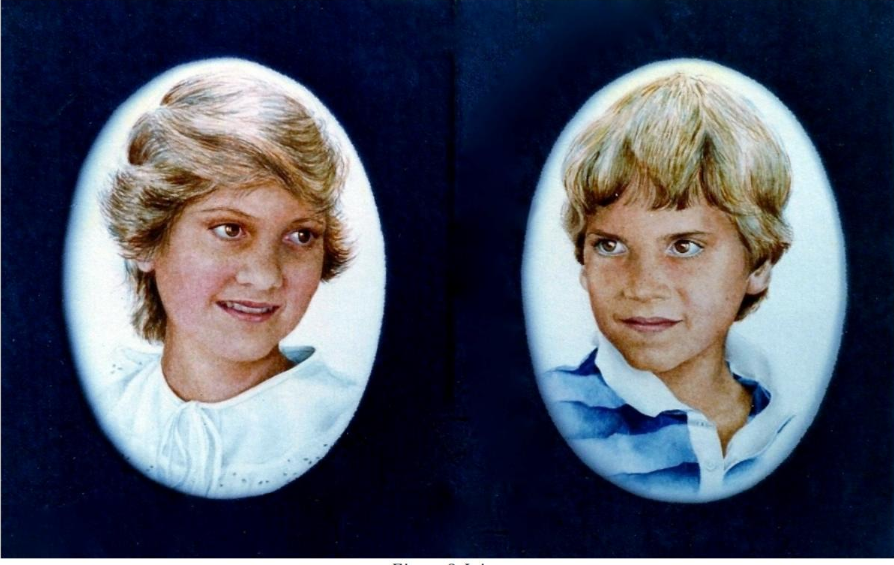 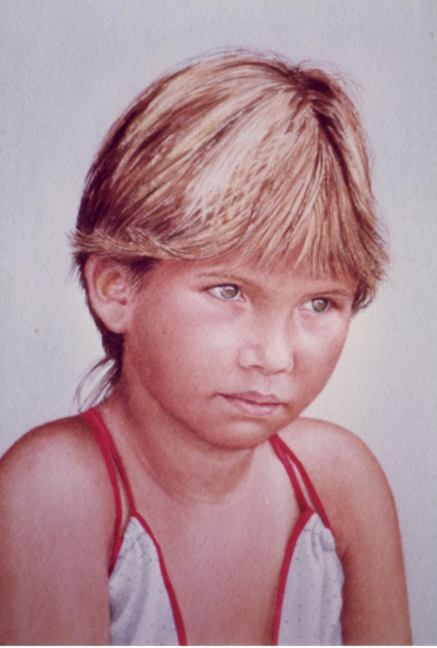 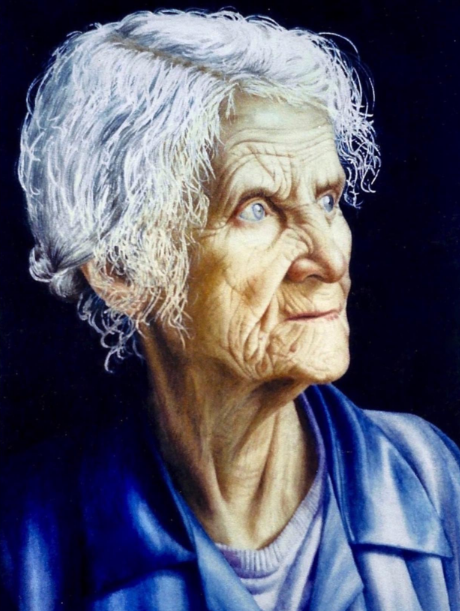 'The first daffodils were bravely pushing their heads through the snow. I saw that as a metaphor for fortitude'

There was snow on the ground when I was admitted to Christies and the first daffodils were bravely pushing their heads through the snow. I saw that as a metaphor for fortitude - and so painted some when I got home and took the picture to the hospital at my first check-up. The nurses asked the maintenance man to hang it on the wall by my bed. In addition I framed two prints for them. 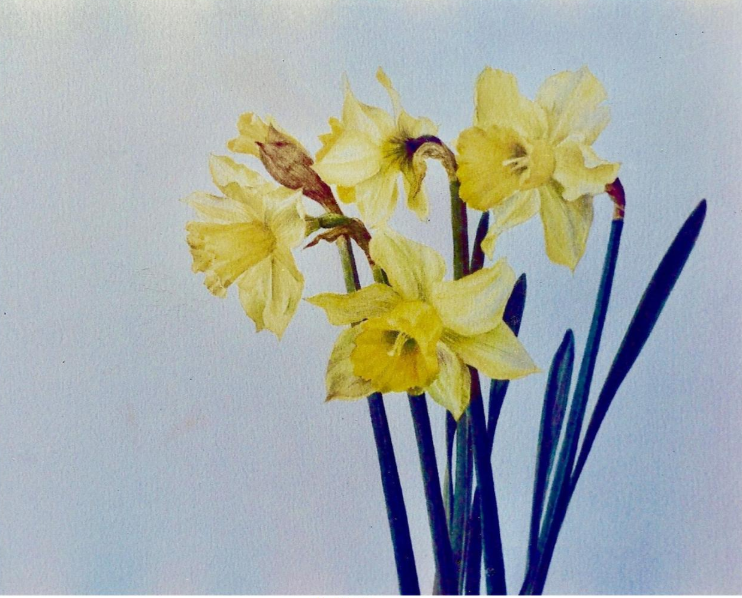 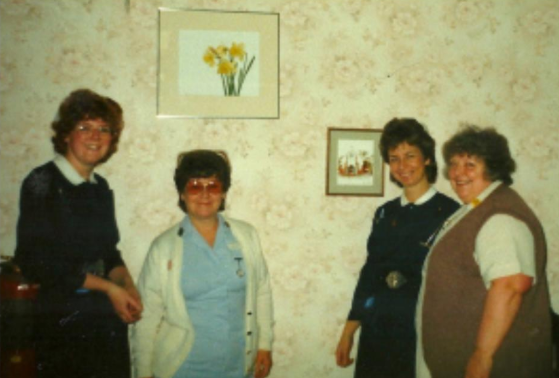 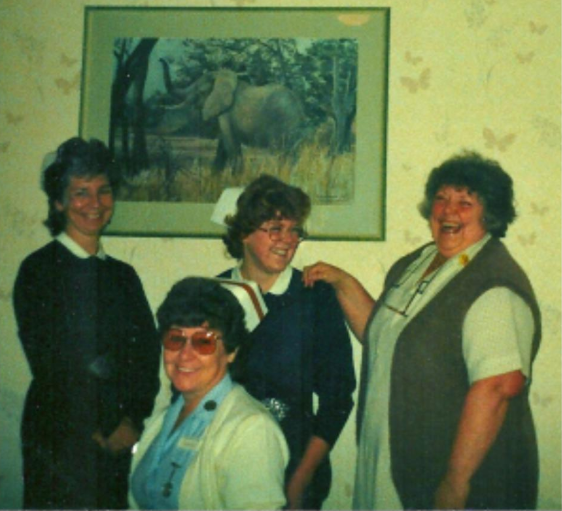 'I couldn’t have wished for better treatment from any of them.'

In the photos above are Sister Kay, Staff Nurse May and Auxiliary Vera, apologies for not remembering the names of the other two sisters. I couldn’t have wished for better treatment from any of them. Next time it was to be on a surgical ward….'