Living with Bowel cancer and a Stoma 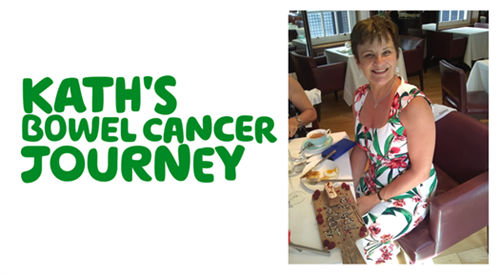 There are many discussions here on the Community about how a cancer diagnosis can affect someone’s life. Kath is here to share her experience of being diagnosed with bowel cancer 11 years ago and the physical and emotional challenges that she has faced.

There can be some comfort gained from reading a shared experience which is why Kath is sharing her story in hope that it can provide support to others. If you read Kath’s story and want to read other personal experiences, you can find many different discussions in the Bowel cancer forum.

Eleven years ago, I was diagnosed with Bowel (rectal) cancer. I'd visited my Doctor several times the previous year as I was having to go to the toilet more frequently. Sometimes there was blood in my stools, and I was told I'd had piles. I wasn't given the option of a colonoscopy.

In October 2010, fortunately for me, I was seen by a Locum, who referred me for a colonoscopy.

After the procedure, my husband and I were told that I had cancer. They said I'd have to have a permanent stoma as the tumour was low down in my intestines. They didn't know if the cancer had spread and we left the hospital in a daze.

“They said I'd have to have a permanent stoma as the tumour was low down in my intestines.”

Things moved rapidly from there. Within a week I'd had blood tests and visited the Consultant Surgeon. He told me the cancer hadn't spread and that it was grade 3a.  It hadn't gone into my lymph nodes but had started to burrow into my intestine walls. He also told me that I'd have three months of cancer treatment. I had chemotherapy and radiotherapy before the operation. (From November 2010 to January 2011).

The treatment was horrendous, my rectum and anus felt like they were on fire every time I needed the toilet. It felt like little people were running up and down those areas with slashing knives and waving torches. 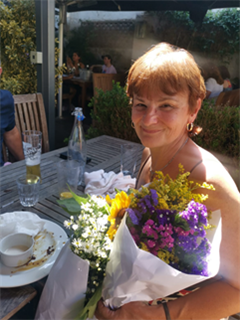 In March 2011 I had the operation. I continued to be in a lot pain and stayed in hospital for ten days, heavily reliant on morphine. I quickly learnt how to deal with the colostomy bag and other body changes.

“my rectum and anus felt like they were on fire every time I needed the toilet. It felt like little people were running up and down those areas with slashing knives and waving torches.”

Despite numerous scans, the hospital struggled to understand why I was in so much pain. I was discharged, but soon developed other issues. One scan showed that I had adhesions (inflammation) on my intestines. Unbeknown to everyone, this got so inflamed, that food couldn't be digested and became blocked.

Six weeks after the first operation I had another *blockage* whereby the surgeon changed my colonoscopy to an ileostomy. This turned out to be a complicated operation where I nearly died on the operation table. 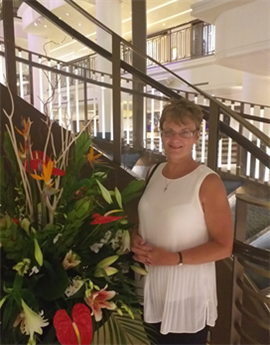 Over the next six years, I was in and out of the hospital with kidney failure, urine infections and issues with the stoma. I developed gout and body cramps. My immune system suffered, and I got shingles which went to my nerve endings. Sometime after this, I got encephalitis which was terrifying.

I agreed to a third operation which meant I had a partial reversal. This meant that I still kept the stoma. This worked for me and my health improved from there.

“The irony now is that although physically I'm doing OK, since March 2020 when the covid pandemic really kicked off in the UK, some things became difficult. I have complex emotions and thoughts in me.”

I was able to return to work after a year as a Probation Programme Facilitator which I loved. As long as I keep hydrated, my stoma and kidneys cause me few problems.

The irony now is that although physically I'm doing OK, since March 2020 when the covid pandemic really kicked off in the UK, some things became difficult. I have complex emotions and thoughts in me. I have acute anxiety and depression which I'm fighting and finding far, far more difficult to deal with.

I'm on a lot of medication and I've had two counselling courses based on Cognitive Behavioural Therapy. Known as CBT for short. I need to change my negative thoughts to positive ones and CBT helps turn your emotions. This can be hard to do.

We’d like to thank Kath for taking the time to share parts of her Cancer journey with us. As Kath mentioned towards the end of her blog there are the emotional effects of a cancer diagnosis that can have a great impact on your life. It’s important to know what support there is to help you when you need it and posting in our discussion groups can be part of the support you access.

Here on the Online Community we understand how valuable peer support can be. Why not offer some support to Kath in the comment box below. You can also start a discussion in the Bowel cancer forum and tag ‘@KathH2’ in the discussion.