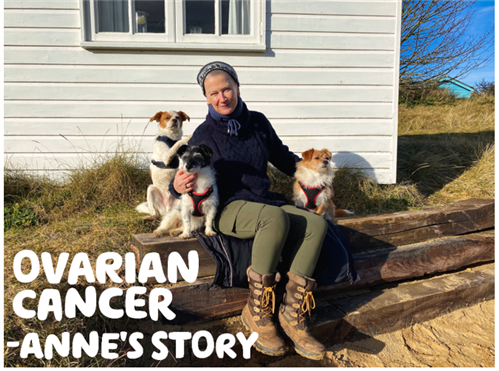 March is Ovarian Cancer Awareness Month so to recognise this, Anne who is known as KralC on the Community, has kindly shared her blog post ‘Who…?’ to tell her story and spread further awareness of Ovarian Cancer.

We would like to take the opportunity to thank Anne for sharing her personal experience with the wider Online Community and send our very best wishes to her with her ongoing treatment and tests.

Not in all the months since my ... diagnosis. No, not me.

Isn’t the word - CANCER - in itself enough to stop any vague distant notion before the idea could even begin to formulate itself?

In the past I have rushed by the broadcasts, the features, the interviews, the podcasts, the TV programs.

The valiant battles. The beautiful babies and children left behind. I rushed straight through and past these “other” lives. These “other” stories.

The mourning. The suﬀering. No way can I be here! Until of course, I found myself - here.

No, not suddenly. Not at all.

And that is when and where the story began.

What was that initially subtle, unfamiliar sensation presenting itself somewhere? Somewhere not quite deﬁnable. Somewhere in my gut, my solar plexus. Too much indulgence? Too much food? Too much drink? Too much traveling? Too much not saying exactly what I wanted to, needed to? Too much life for sure, lived in the oﬀ-world state of hypersensitivity and perpetual anxiety. 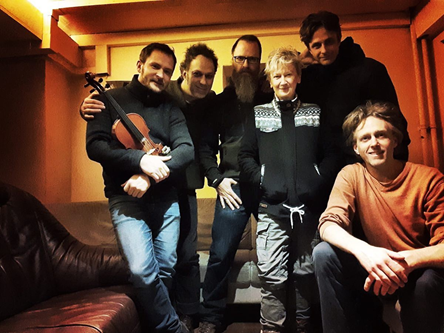 I was 59 years old. I would be 60 in May and was beginning preparations for my 40th anniversary concert tour, having lived and worked as a songwriter, poet and musician for all that time. What a privilege it had been to live nearly all my adult life doing something I loved so much. I took it for granted that things would always stay that way.

At 59 however, wasn’t it normal to start feeling a bit tired after so many years touring, recording, traveling and dealing with the music industry? I’d made my mind up that a year before the start of the tour I would adapt my diet, cut out alcohol and take up more exercise. Naturally, I began to lose weight. All perfectly normal I thought. The tiredness though. The tiredness just didn’t pass. Exercising more regularly I noticed a stiﬀness in my calf, easily put down to stretching or pulling a muscle I’d over exerted...surely?

I saw my doctor, who also put it down to probably over-doing the exercise. Try some Ibuprofen gel. It still didn’t pass.

I went back to the doctor who recommended I see a physiotherapist. Still it didn’t pass.

I went back to my GP practice and saw one of the other doctors who also thought it might be due to overdoing the ﬁtness regime. However, just as I was leaving the consulting room, she called me back and asked if I would mind her trying something.

She wanted to do a d-dimer test. I’d never heard of it before and she explained that it was a test for thrombosis. I was somewhat taken aback but, having travelled so much in the previous months in cars, trains and planes it could have been a remote possibility. A pinprick in my ﬁnger and a 20-minute wait. The test came back positive. My doctor rushed me oﬀ to a special unit at the local hospital where DVT was diagnosed. Warfarin injections and a continuous prescription for blood thinning tablets. We put it down to it being caused by the long ﬂights. It seemed that was it I would be monitored. I went on with preparations for my tour.

Everything stopped- except the rush of fear. That didn’t stop.

This was early March and the full extent of the coronavirus crisis was just kicking in. Lockdown, restrictions being put into place everywhere. This didn’t deter my amazing doctor who, against all odds, got me tests and scans within a week. We both knew what the likelihood of these symptoms meant.

Then came the waiting for the results. The interminable, torturous waiting. It is referred to in certain quarters here at Macmillan as “scanxiety”. The loneliness of this experience cannot be expressed in words. Can it? What does this time do to each individual? There can be no generalisation.

In my 59 years, I had had the good fortune to have never been seriously ill. Never admitted into the hospital. I found them mysterious and terrifying places, even as a visitor. Now, this giant machine could look into me far deeper and reveal far more about me than I could myself. It could see what I was doing to myself without my slightest knowledge.

Time passed. Weeks that seemed like months. Each hour a torment of eternity. I don’t know how but I received a notiﬁcation to visit the gynecology department one afternoon in that extraordinary hot April. The intensity of the sunlight, so bright, hot, and life-afﬁrming.

“Now, this giant machine could look into me far deeper and reveal far more about me than I could myself. It could see what I was doing to myself without my slightest knowledge.” 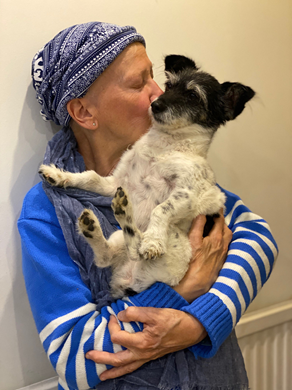 Due to corona restrictions, my friend who’d accompanied me for support, was not allowed to enter the clinic with me. I was taken into the consulting room by two masked and uniformed Macmillan nurses. Their gentle sensitivity at odds with the cold, sterile precautions so necessary now because of the risk of infection. The consultant was as I expected, detached, mechanical and with seemingly little if any empathy. “Oh yes, this is a tumour. An ovarian tumour. Large and in need of radical surgery and chemotherapy”. Alone, I fell apart.

“Their gentle sensitivity at odds with the cold, sterile precautions so necessary now because of the risk of infection.”

With great kindness the staﬀ called my friend who had made her way out of the hospital to wait for me and she was allowed back to sit with me as they explained what would happen next.a biopsy.....more tests... I was there but I was not there. Like being under water, I could see people mouthing words but couldn’t hear them. It was like I was listening from another room. No, not listening, just aware of words, distant and incomprehensible, being directed at me. I don’t really know what happened next except somehow, with the assistance of the Macmillan nurses and my friends’ support, I managed to leave and put one foot in front of the other and step back out into the real world, when all I wanted to do was to take myself oﬀ into the woods like an injured animal and lay down on the cool grass, curled up under a beautiful tree and never move again.

If you have been diagnosed or affected by ovarian cancer, the Ovarian cancer forum is a place to talk to other members in a similar situation. For information and support regarding signs, symptoms and treatment, you can visit the Macmillan website.