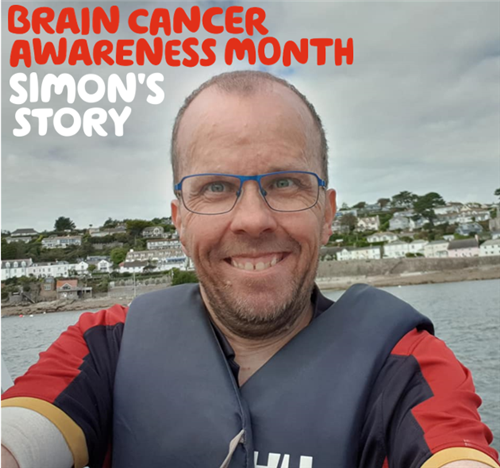 Simon is 45 years old from South Wales and today he is sharing his cancer experience as part of Brain cancer awareness month. If you or someone you know has been diagnosed, our Brain cancer groups are here to support you.

I have had poor health most of my life due to a neurological condition called Neurofibromatosis. When in my teens I had lots of problems with my bowels and lived with a stoma bag for a year and had a total colectomy which is the removal of the large bowel. This was down to benign tumours in my guts. After this, my mother was told I wouldn’t live to see my twenties but happily, I proved medics wrong.

At twenty I was diagnosed with testicular cancer. It was discovered straight away, and I had an operation to remove the left testicle, it was all I needed. As years went by, I developed benign tumours in my legs and one wrapped itself around the sciatic nerve in my right leg and surgery caused permanent damage to the limb. I walked with a crutch for 18 months.

Then in 2003, I had a fall and badly dislocated my left leg. The benign tumours had made the leg weaker and easier to dislocate, but despite treatment, the leg never got better and I have used a wheelchair since. Despite using a wheelchair, I have kept my independence and fitness and lived alone. I have had numerous surgeries since but always got through it and am happy that I kept living my life.

"At twenty I was diagnosed with testicular cancer. It was discovered straight away, and I had an operation to remove the left testicle, it was all I needed."

Over the years I have become chair of my local disability group and am a Board Member with Disability Wales. Alongside this, I am heavily involved with my local Rugby Club – Bridgend Ravens RFC.

In 2018 I had a routine scan on my back. My back was fine, but something was noticed going into head and I was invited back for a head MRI. This sadly showed I had a brain tumour.

At the time it was just a grade one mass and in April 2018 I had an operation to biopsy the lump. After the first surgery, I was told the tumour was too deep and it was unlikely it could be removed. I was given six months to live.

I was devastated, and it was hard coming to terms with it. Harder telling loved ones the diagnosis. About two months later the tumour got worse and more sinister so I was offered the chance to remove it. I was told that by doing so, it would cause severe disability and could leave me incontinent and paralysed. Not having an operation meant death so I went for it.

“Not having an operation meant death so I went for it.”

Surgery was done in June 2018 and it took me a long time to recover however it was far more successful than anyone anticipated. I was extremely weak after and lost my power of speech for a while. This came back and I got stronger. That November a scan showed that more of the tumour had been removed than the medics thought and my health had improved enormously.

“A scan showed that more of the tumour had been removed than the medics thought and my health had improved enormously.”

On the way home from the hospital I noticed on Facebook a friend had signed up for the Wales Marathon, I thought “that would be a good way to get fit” and did the same so over the next four months, I got fitter and wheeled the 26.2 miles in just over four hours. I completed the event and was so happy and proud to prove many wrong who had suggested I would need full time care.

I did say never again but after this event helped raise over £6k for two charities, I signed up then and did another four marathons and a number of halves and 10ks. I became the first wheelchair user in over 20 years to take part and complete the New Forest Marathon. All this was to raise money for a young women who woke up paralysed with transverse myelitis to get more physio and feeling and movment back.

Doing these events gave me huge satisfaction but also made me fitter and stronger and helped me prove medics wrong.

In March last year I began to feel very dizzy and lightheaded and one morning struggled to get out of bed and lift head off pillow. I had to be helped by a friend and went to see my GP, sadly this was dismissed and I was just given anti-dizzy tablets. These worked but I was still worried that my brain tumour had got worse, but my routine MRI was due in a few days so assumed that would pick up any change or growth.

"I began to feel very dizzy and lightheaded and one morning struggled to get out of bed and lift head off pillow."

Then the Coronavirus Pandemic and lockdown began and my MRI was postponed. I had letter saying all routine and non urgent treatment was being cancelled.

To me this was urgent, I made numerous calls to try get scan reinstated. This took over two months and then I had a call the day after my scan to say the tumour had grown and spread through brain, it was now grade three and was inoperable.

Again I was gutted, I was offered chemotherapy and radiotherapy but was told these treatments would slow tumour growth down and not cure me. They gave me two years at most to live.

"I had call the day after my scan to say tumour had grown and spread through brain, was now grade three and was inoperable."

I had chemotherapy at the start, but my body and blood counts reacted very badly which hospitalised me. Ten treatments were planned but I only had five.

I then had radiotherapy daily for six weeks in October and November last year. My body reacted better to this, but I still felt very tired and lethargic from it.

I had signed up for a number of Marathons last year, but these were mostly postponed or cancelled due to the pandemic. When the London Marathon did go ahead virtually, I wheeled the 26.2 miles around the streets near my home. This was during my radiotherapy treatment and the event took me over seven hours instead of the usual four, plus it rained heavily and blew a gale throughout. I am pleased to say it was completed and over £7k was raised for the charity Whizz-Kidz. 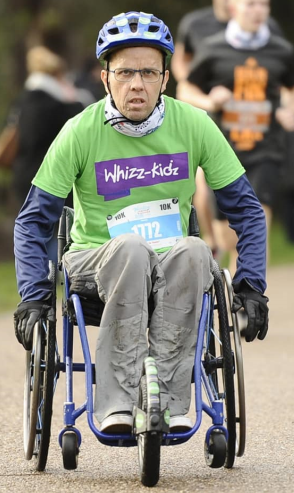 After this event, further treatment caused me to get sicker and more tired, I needed iron treatment after but I consider myself lucky as things could have been much worse.

“I know I still have a brain tumour and a shorter time to live but the way I combat any depression is to have things to look forward to.”

I wanted to end on good news, I was told last year that any treatment would not shrink mass but slow it growing. I recently had another MRI scan which showed tumour had shrunk thanks to the radiotherapy and am feeling better than anyone expected. Isolation and lockdown has affected my mental health but physically I am doing well. I have no idea what future holds but am determined to enjoy it to the full as believe positive thinking and determination helps us get through bad times.

Anyone who is given a bad diagnosis I urge them to focus on the positives and if they can carry on as normal as possible. I know my health isn’t great but hoping lockdown ends soon and can compete in numerous events and get back to watching Live Rugby and attending functions again. This will keep me sane and normality will hopefully improve my fitness.

We would like to take a moment to thank Simon for sharing his cancer journey with us and we hope you have taken some comfort from hearing his story. Here on the Community we are passionate about providing members and guest bloggers a space to share their personal cancer journeys as it is so important to feel that you are not alone.

If you would like to share your cancer experience in our Community news blog, please do get in touch with the team to community@macmillan.org.uk.