Being bodies - breast cancer and wearing a breast prosthesis 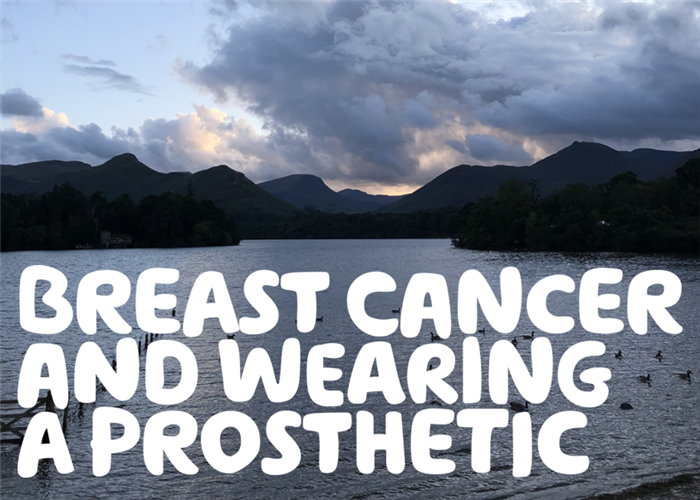 Sapphie, also known on the Online Community as Secondary BC , was diagnosed with breast cancer at just 32. Sapphie talks us through their experience trying several different types of prosthetics following their breast cancer surgery in the 1990s, and how humour has helped them and their family over the years.

I was diagnosed when I was 32 years old, after finding a lump and being told by a consultant I was too young to have breast cancer and was sent on my way. A few months later we moved to a new area. My new doctor referred me to a consultant took the lump seriously, and I was diagnosed with primary breast cancer.  I had a radical mastectomy on the right and given options of further reconstruction in the future (this was normal in the 90s). I had a concave chest on the left, which caused a lot of laughter.

“The children were so young… They would fight to take turns in warming my silicone prosthetic each morning and learned to do things they had not been expected to do beforehand.”

I have a small bust so it was not immediately obvious to others I had had surgery, and I took to wearing baggy clothes in the winter months. When the summer came around, I had to face the more fitted clothing, but this was 6 months after surgery and had come to terms with my silicone prosthetic. We did have some fun moments such as the prosthetic falling out when I was digging in the garden, I nearly put a fork through it, or when I thought I had left the prosthetic in a locker at the swimming pool and had to call the pool to ask if it had been found. I was in tears with laughter on the phone and so was the lady on the other end.

“I was in tears with laughter on the phone and so was the lady on the other end.”

Some years later I had an ‘Expander Prosthetic’ inserted this was inflated every two weeks to stretch the skin to ensure a more realistic droop the expander was over inflated before being partially deflated and plugged. This meant for one summer I had what the family called a’ Pamela Anderson’ side and a normal side, being very lopsided for about 10 weeks. This felt odd, but the family got into the spirit and that helped me loads. I had the expander in place for about 14 years and never had a problem. Only those I knew well knew about my cancer scare and those I did not tell never guessed.

I volunteered with the cancer department and shared my experiences with other patients both verbally and visually. This helped me and those who were at the start of the ‘living with cancer‘ journey.

After 14 years the expander needed to be removed and the question of what next arose. I opted for a Tram Flap as this meant a longer operation, but that was it and no more operations in my more elderly years were needed. The family joked and still do that I had a ‘tummy tuck and tattoo’ on the NHS.

“My family and I have always supported each other and made light of a life-threatening condition. This has helped me remain positive”

My family and I have always supported each other and made light of a life-threatening condition. This has helped me remain positive and also removed any fear regarding their futures and possible brushes with cancer. My girls are now 29, 31 and 33 and still recall many happy memories around my diagnosis and don’t fear the disease in a way they may have done.

In 2016, hours before embarking on a three-week holiday to Cambodia, I was diagnosed with metastatic breast cancer. Again, we remained positive and didn’t let it affect our amazing holiday.

“Our bodies change throughout our lives naturally and we all adjust to meet these changes, should breast cancer be that much different?”

Since 2016, the cancer has spread from my bones to my pancreas and liver. I have lost over three stone and again body image is a potential issue. Body image is very important, but not the ‘be all and end all.’ Our bodies change throughout our lives naturally and we all adjust to meet these changes, should breast cancer be that much different? My husband and children have helped and encouraged me to renew my wardrobe accordingly. Again, body image is at the forefront, but with lots of positive support from close friends and family I am again adjusting as I would if I had lost the weight naturally.

Our new series “Being bodies” aims to explore our relationships with our bodies, from head to toe and everything in between. We’d like to thank Sapphie for sharing their story with us. If you’ve been affected by breast cancer, having a mastectomy or the decision to wear a breast prosthesis, why not share your own experience in the “Breast cancer” group?