Cancer Blogs
A booby is a seabird with blue feet Tis but a scratch …. Just a flesh wound

Tis but a scratch …. Just a flesh wound

The Dark Knight in Monty Python loses his left arm; I have lost my left breast.

Presumably, his left lymph nodes are removed at the same time, as they were for me.

So we share a similar experience then. Well, that’s unfortunate.

But unlike the Dark Knight, I definitely won’t be inviting further attacks on my body.

Already I have lost way more than enough, thank you.

My own injuries are serious and yet not.

For a start, it seems that I have somehow been simply sellotaped back together.

Which is sort of encouraging.

Maybe I can claim “Tis but a scratch […] Just a flesh wound” after all?

Still, it may be wise to play down the upsetting aspect of my surgery anyway.

The damage could be superficial, temporary and no cause for concern.

At the moment, I need to be brave and just continue.

Hope that things will turn out fine.

Everyone is insisting that “an excellent job has been done” on me. 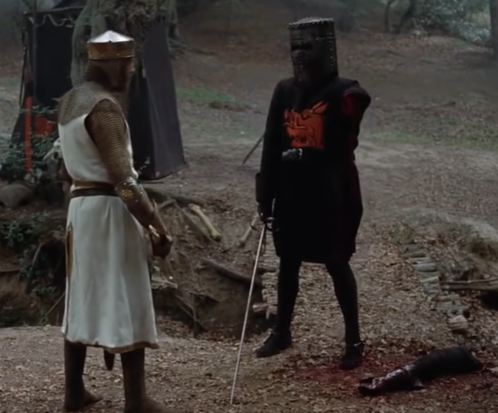 What’s next though, I wonder?

The Dark Knight declares himself to be “invincible”.

Even after he loses both arms and one leg.

(Shortly before he loses his second leg.)

In the worst case scenarios, positive thinking could get me through then?

And if that isn’t enough, then I know there is always hospital sellotape.